The ISimangaliso Park stretches from the village of Saint Lucia, to the south, up to the Mozambique border, to the North. It’s vast and outstandingly rich in biodiversity, as we could witness during our safari in the reserve, yesterday. But Saint Lucia is something of a destination in its own right, too, and conveniently close to boot. Laying between South Africa’s largest river estuary and the Indian Ocean, it’s surrounded by water to the extent that it counts quite a few hippos among its residents. They are quite easily spotted around town by night, and although inoffensive looking they should be approached with caution, as they can turn aggressive and their bulk makes them quite dangerous when enraged. They arguably cause more human casualties than any predator! We rather prefer going after them by day, cruising along the 85 km long estuary that harbours over 800, as well as 1,200 Nile crocodiles, and over 450 species of birds. What a memorable day. 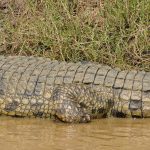 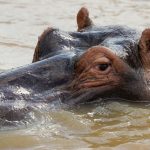