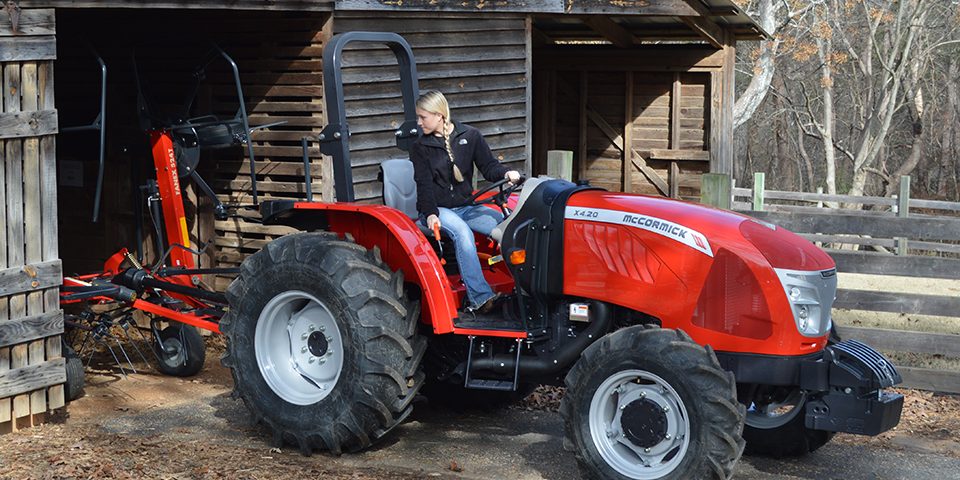 With the exception of the X8 VT-Drive Series, the newly released models fit into a horsepower segment that is already covered by McCormick tractor.  However, these new machines offer new levels of features, comfort, and performance that target a wider range of customers within the segment.  “We want to offer customers more choices within the McCormick tractor line-up,” says Tiago Bonomo, President of McCormick North America.  “Customers have specific needs, and we need to be able to meet those needs.”  After the initial unveiling in Orlando, McCormick will officially launch all 4 new models at the National Farm Machinery Show in Louisville, KY, booth 4060 in the North Wing.

The new X4 STANDARD Series is a simple, reliable utility tractor that will target a market dominated by suppliers with manufacturing in low-cost countries.  All X4 STANDARD models are design in-house and built in McCormick factories located in Italy.  Boasting a reliable Deutz 4-cylinder diesel engine and 12-speed shuttle transmission, these machines are built to work.  The simple operator’s platform is constructed of steel for durability, yet includes comfortable refinements and intuitive control layout.  A powerful X-Series front loader (built by Alo) ensures that these new tractors can get the job done.  The X4 STANDARD Series offers 3 models from 64 to 79 horsepower.

The new X6 STANDARD Series has similar attributes to its smaller brother, the X4 STANDARD Series, but in a larger chassis and with more power.  Two models will be available, boasting up to 121 and 130 horsepower.  These large, open station tractors feature a simplified configuration for those customers seeking a simple, reliable tractor with the power to handle big jobs around the farm.  A 4-cylinder BETAPOWER diesel engine drives the shuttle transmission and 4wd driveline.  Capable hydraulics provide massive lifting capacity at the 3-point hitch and ample flow for a loader and implements.  The large operator’s station with flat foot deck and comfortable control layout make the new X6 STANDARD Series a welcome option in the 100+ horsepower utility tractor segment.

For customers looking for greater performance and technology in the large utility tractor segment, McCormick offers the new X6 VT-Drive model with CVT.  This dynamic and capable tractor boasts a continuously variable transmission and ISO BUS technology to boost productivity and take McCormick to the next level.  The continuously variable transmission (CVT) is a concept that combines the best features from two different transmissions:  the efficiency of a mechanical transmission, and the infinite speeds and smooth acceleration of a hydrostatic transmission.  The result is a tractor that delivers peak performance and maximum efficiency in nearly any application.  An integrated 12-inch color, touch-screen universal terminal with ISO BUS connectivity and available electronic hydraulic controls give greater flexibility and level of control to match the needs of demanding agricultural operations.  The single X6.430 VT-Drive model delivers up to 130 horsepower.

Last but not least, the New X8 Series extends McCormick’s reach to over 300 horsepower, allowing the brand to compete in the professional agricultural segment dominated by only a few major manufacturers.  This new high horsepower offering consists of 3 models ranging from 264 to 310 engine horsepower.  Each model features a powerful 6-cylinder BETAPOWER diesel engine and massive CVT transmission to deliver infinite speeds from 0 to 32 mph (0 to 50 kph).  Hydraulic front axle suspension and cab suspension provide both comfort and performance during operation.  Closed center hydraulics with up to 54 gpm (212 lpm) of flow can power a wide variety of implements.  The large cab is packed with technology and capabilities to meet the toughest demands, yet the tractor remains very simple to operator.  Intuitive controls and systems ensure that any operator can get in and drive, and that the tractor will perform in a wide range of operations.

“Introducing these new models is a game changer for McCormick,” says Taylor Grout, Product and Marketing Manager for McCormick North America.  “Each model has unique qualities and features that target a specific customer segment.  These tractors expand McCormick’s reach in the market place and provide our customers with more choices to fit their needs.”

Dealers and sales team members from all across the United States and Canada were invited to attend the 2017 Dealer Meeting on February 2nd and 3rd, 2017.  In addition to the unveiling of the 4 new series, attendees were informed of some new corporate initiatives being introduced in 2017 and beyond, and were also treated to exceptional accommodations, meals and entertainment at the Renaissance Orlando Sea World Hotel and Resort.

For more information about McCormick North America and its affiliates, please visit the McCormick website, www.mccormickna.com.