“THE MUSIC HAS CHANGED”, McCORMICK’S MOMENT OF TRUTH AT THE WORLD CONVENTION 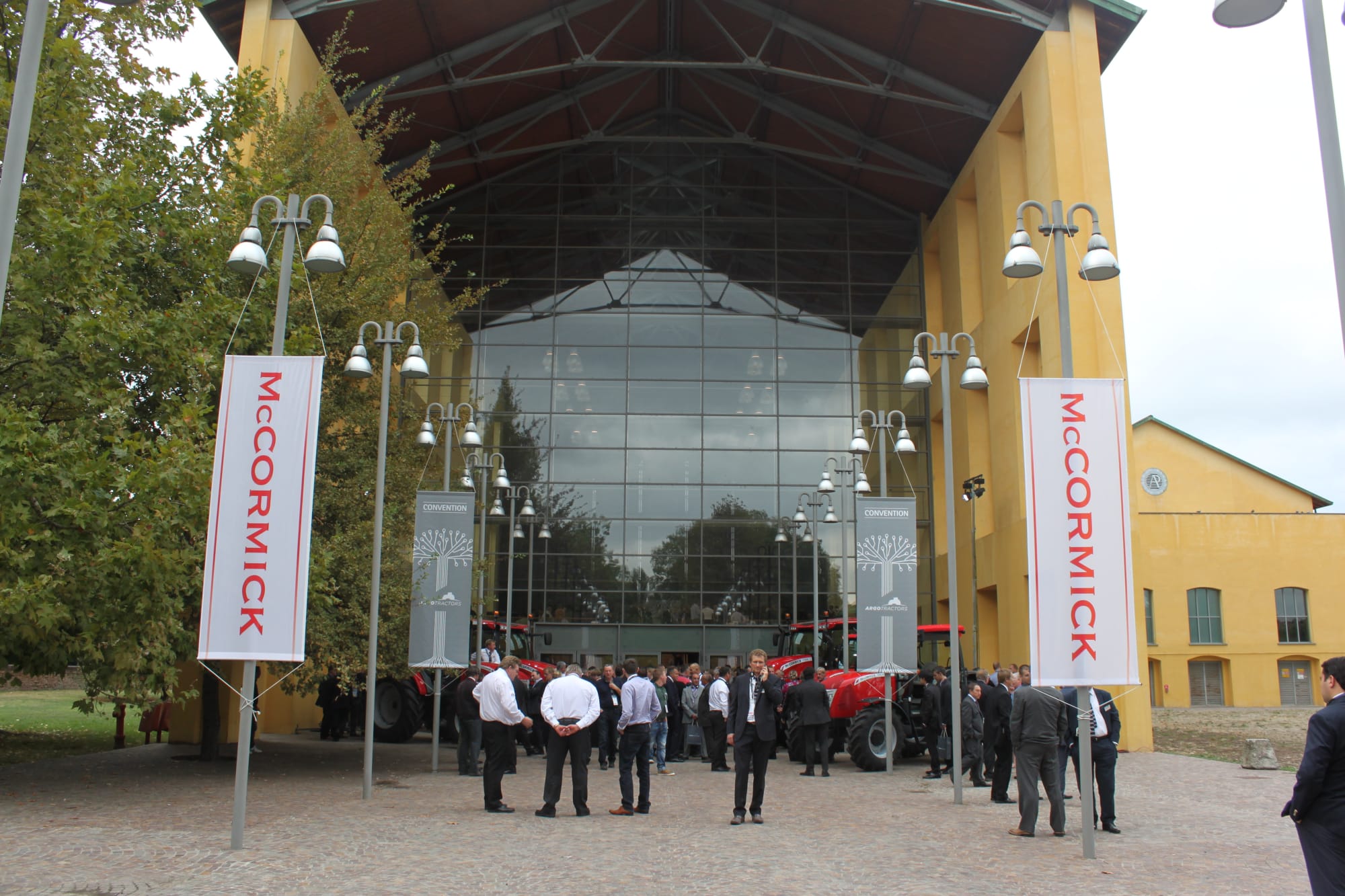 “The music has changed”: this was the theme of McCormick’s World Convention, held recently at Parma’s Auditorium Paganini on 30 September and 1 October 2013. Entitled “Xpression”. It was the perfect platform to demonstrate the developments and changes that are under way within Argo Tractors and the McCormick product offering which created an atmosphere of enthusiasm and new opportunities for more than 400 participants from the McCormick distributor and dealer sales network from over 40 countries.

There was an overwhelming feeling of change and innovation that marked McCormick’s future activity right from Chairman Valerio Morra’s opening speech. “I can truly say that my dream has come true”, affirmed Valerio Morra, who then introduced the company’s goals and objectives that would be the focus of the meeting, plus a few hints about new innovations that would be presented at November’s Agritechnica. This was further strengthened by the revelation of additional products already in the engineering pipeline that will in due course.

The McCormick tractor line up during the next few months, include a brand new X4 Series, X6 Series and the ultra-modern X7 VT Series. This will be the first McCormick tractor to feature a continuously variable transmission. The X7 with VT will be premiered at Agritechnica, demonstrating our commitment to the tractor market in Europe and beyond. The X7 VT features alongside the X7 Series with powershift transmission unveiled at SIMA Show last February.

Argo Tractors have not only changed the product but have looked at the whole organization and processes from design, production, training activities, service facilities and having a successful dealer network, all of which are fundamental factors for the long term success of the McCormick brand in a global market.

The brand development strategies were illustrated by corporate executive Simeone Morra, Corporate Business Manager. Paolo Fracassini, Supply Chain Manager, described the factory assembly innovations and methodology to enhance production and quality processes in the factories of Fabbrico, Luzzara and San Martino in Rio where one of the most important changes has taken place, i.e. introduction of the “Kaizen” project, a new approach focused on simplified job organization that also teaches how to spot and eliminate waste in a business process.
Antonio Salvaterra, Marketing & Communication Manager outlined the company’s activities to market and promote the new ranges which included internet and apps that potential customers could link into.
The audience also had detailed product presentations and the support activities that are in place for these new products as they enter the market place. Giorgio Guaitoli, Parts Manager of the Argo Group, described how the Parts Service will be enhanced with new technology and services from business partners to deliver a recognized parts support operation.

Closing the meeting Alberto Morra, Board member, affirmed:“ We are specialists and intend to remain as such by monitoring the development of our products and network with the utmost dedication”. He also spoke about how this family-run business is not just open to change, but also to communication by sharing the imminent strategies with its dealers and distributors. Also present during one of the meetings were journalists from a wide selection of International magazines.

Over dinner the dealers had the chance to talk with Argo Tractors staff sharing ideas and successes from around the world.

The following day saw an impressive lineup of machines in the field at “La Gatta”, a farm close to the Fabbrico plant. Here dealers were able to view X7ˢ, X50 ˢ and X50M ˢ at work in tough conditions with the chance to ride on them whilst ploughing, pulling disc harrows, and one with a multi axle slurry tanker.

Groups were also shown the factories and experienced the investment of new machine tools and changes that are ongoing in Fabbrico and San Martino.

Argo Tractors, with its headquarters in Fabbrico (Reggio Emilia), manufactures tractors under the Landini, McCormick and Valpadana brands and belongs to the Argo Industrial Group. Argo Tractors SpA has tripled its production volumes in little more than 10 years, with a remarkable growth in concrete results: the group turnover amounts to 500 million Euros. The enterprise numbers 1,600 employees and has 4 manufacturing plants, 8 business branches in various parts of the world, 130 overseas importers and 2,500 dealers. Statistics that have allowed the Landini, McCormick and Valpadana brands to achieve a significant standing in the domestic tractor market and to represent one of the most important international players, thus confirming the value of a successful group strategy.