Kimberley has always been known for diamonds – the De Beers company’s involvement in the mines made it the largest town in the region in the mid 19th century.  At the time it was so rich and forward-looking as to be the first in South Africa and the second in the world to adopt electrical street lights. The largest mine alone (it had a surface area of 170,000 square meters and a depth of 240) yielded three tons of gems to the De Beers company, before it was closed in 1913. Today the so-called Big Hole, the deepest man-made open-air mine on earth, has been turned into a museum. Although the other four diamond mines around town have all been abandoned, diggers are still very much active in Kimberley and do occasionally strike it lucky. We have a team change today: Marianna, Amerigo and Giuseppe are taking their leave and flying home to Italy. It’s a sad moment when they say goodbye, but Xtractor must go on. New friends are flying in – welcome Mauro, Samuele and Luca! 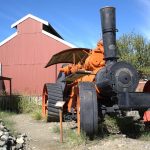 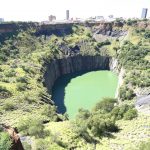