With power outputs from 99hp to 113hp, field work such as grass mowing, tedding and raking are among obvious roles for the new-generation McCormick X5 Series tractors.

A new generation of McCormick X5 Series tractors now available from dealers throughout the UK and Ireland features more transmission options for a wider choice of gear configurations.

It also offers new reduced-revs 40kph and pto speeds to help with fuel economy and a power-boosted braking system for improved performance with less effort as part of a generous level of standard equipment.

“The X5 Series is at the core of our ‘livestock tractor’ line-up and offers a lively and versatile power unit with a broad choice of specifications to suit different applications and preferences,” notes Adrian Winnett, Argo Tractors managing director for the UK and Ireland.

“Together with a neat and well laid-out cab providing a comfortable and convenient working environment with good all-round visibility, the tractors make an attractive package for field and loader work.” 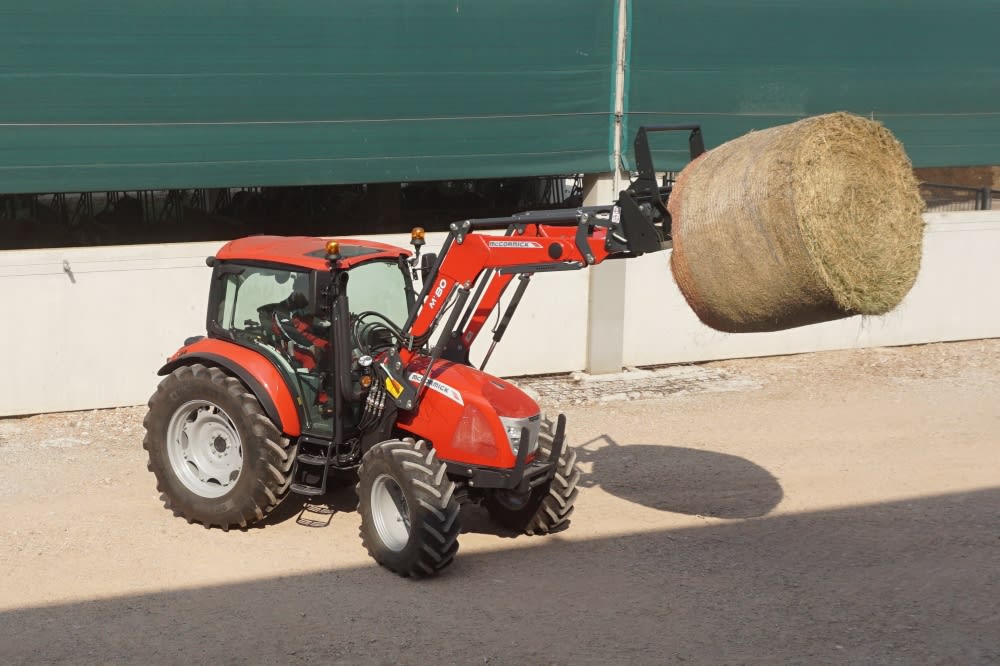 There are three new-generation McCormick X5 Series models with power outputs from 99hp to 113hp. All are available with McCormick ‘soft ride’ loaders.

Apart from attractive power, torque and fuel economy credentials, the new engine has simpler emissions control hardware in the form of a diesel oxidation catalyst (DOC), which unlike a diesel particulates filter (DPF) requires no fuel-burn cleansing, maintenance or operator intervention.

It also has a new viscous drive option for the engine cooling fan, which runs only when necessary to maintain a steady coolant temperature and therefore contributes to the tractor’s fuel economy.

In the new X5 Series tractors, power and torque are channelled through an expanded selection of transmissions.

Buyers can choose between a dry clutch synchro shuttle or wet clutch power shuttle, a gear splitter or three-speed powershift, and from 12 to 36 forward speeds, with a creep gearbox option available across the board.

“The synchro shuttle 12×12 transmission with manual rear linkage control will suit anyone wanting a simple, reliable ‘mechanical’ tractor for yard work on a livestock farm and perhaps also for horticultural and fruit enterprises,” notes Adrian Winnett.

“But there’s also the option to upgrade to the power shuttle with adjustable drive take-up, which apart from giving fingertip forward/reverse selection also brings electro-hydraulic control of the pto clutch for progressive take up of power to help protect implement drivelines.”

Alternatively, there is the new 24×24 transmission with a splitter operated by a button on the gear selector that permits easy up- and down-shifts to cope with changing load on the tractor.

This can be had with the synchro shuttle or power shuttle, as well as a creep ‘box that adds another eight speeds in both directions.

If more ratios are required to handle a lot of field work – mowing, tedding and raking grass for hay and silage, cultivations and harrowing, trailer and spreader work, for example – then the newly-released H-M-L option provides the added versatility of three-speed powershift to complement the power shuttle.

This increases the number of forward speeds to 36 with 12 in reverse – or 48×16 with the creep gearbox – for greater flexibility when finding the optimum speed for every job.

In addition, the new Eco Forty feature reduces the engine revs once a 40kph cruising speed has been reached, to save fuel and give the operator a quieter drive on lengthy transport runs. 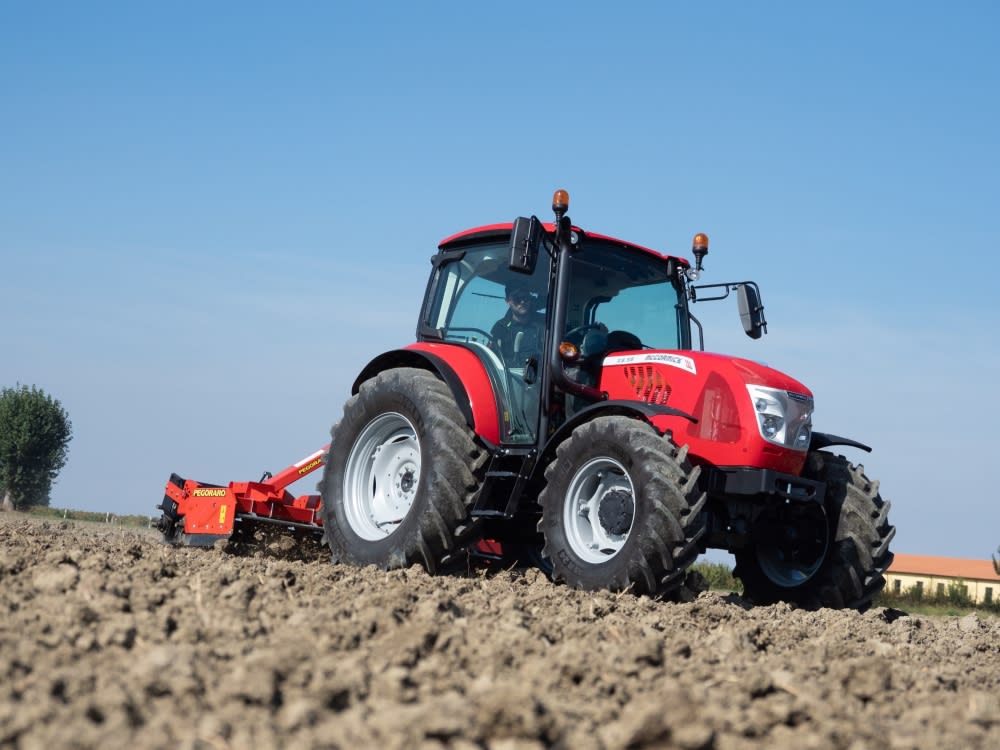 Four-speed pto with ‘power’ and ‘economy’ settings is available on this 113hp McCormick X5.55 and all other models in the X5 Series.

The new four-speed pto option is another fuel-saving feature, this time for field work, as it provides both 540rpm and 1000rpm shaft speeds at ‘economy’ as well as ‘power’ settings.

Other standard equipment includes interchangeable ball and claw ends for the 4500kg rear linkage lift arms, and a push-back telescopic pick-up hitch; electronic control of the rear hitch is available in place of the mechanical system. 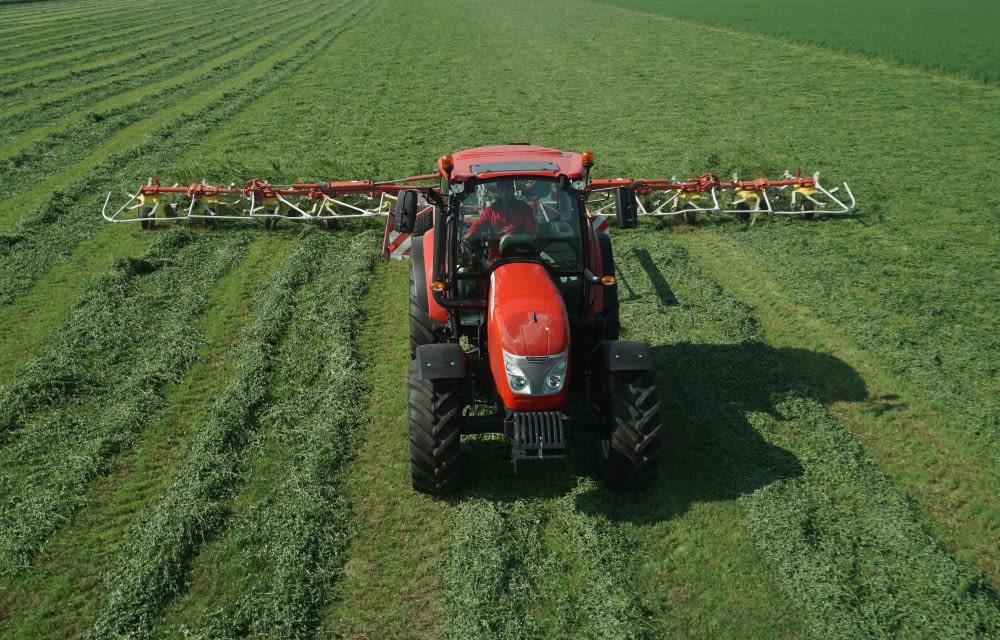 With power outputs from 99hp to 113hp, grass mowing, tedding and raking are among obvious roles for the new-generation McCormick X5 Series tractors.

Larger tyres are being fitted for the UK and Ireland, and a new power-boosted braking system delivers better performance for less effort from the operator, with true all-wheel braking performance provided by the internal front axle disc brakes installed as standard.

The new tractors are available with a McCormick hydraulic loader for materials handling work, equipped with self-levelling and soft-ride suspension for the smoothest possible operation.