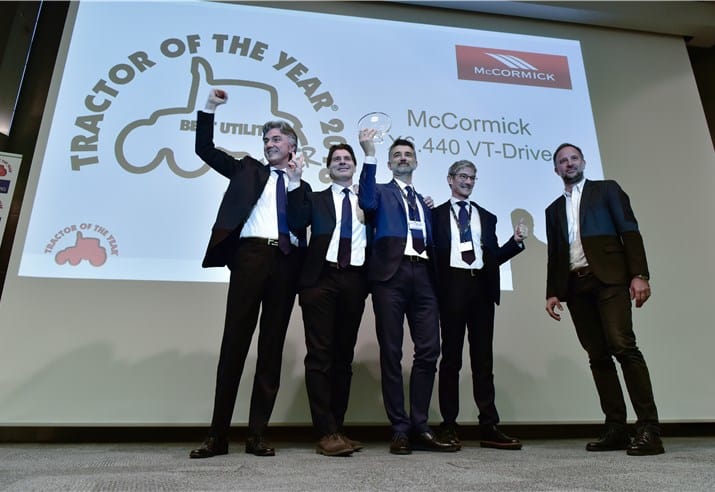 The McCormick X6 VT-Drive has been awarded the prestigious “TRACTOR OF THE YEAR 2018” award in the “Best Utility” category.

Nominated by a jury of 24 journalists, all from major European agricultural machinery magazines, and from an equal number of different countries, this award is an important recognition of the work performed by McCormick in its endeavor to develop new technologies. Work ideally represented by this tractor range, with power ratings between 120 and 140 HP.

Technologies that comprise the VT-Drive (continuously variable transmission) entirely engineered and manufactured in the Argo Tractors production facilities, including complete software development. A transmission that stands out for its reduced number of components in it’s design, particularly the clutch assemblies. This brings with it important benefits as to operating efficiency and costs. The transmission includes a hydrostatic section and a mechanical section: at low speeds, up to 3-4 km/h, it functions as a “solely” hydrostatic transmission while at higher speeds, the hydrostatic assembly combines progressively with the mechanical assembly, thereby minimizing power loss.

Front axle with independent suspension, the 110 l/min hydraulic circuit and terminal with Isobus functions are among the plus points of the range. A powerful, modern and reliable machine, the new X6 VT-Drive belongs to the Premium-end of the “stepless” tractor market.

“We are very pleased to have received this important recognition”, affirmed Antonio Salvaterra, Marketing Manager of the Argo Tractors Group. “This Tractor of the Year award confirms the success of the investments Argo Tractors has made in the Utility segment, a project where every single detail has been taken care of and that has allowed us to create a range with standards near to those of the higher powered tractors in terms of performance and comfort.”

The award was received 12th November during a special ceremony on the inaugural day of Agritechnica, in Hanover 2017.

On the 20th September, the jury members had had the opportunity to visit the Argo Tractors factories when the machine was presented in detail. Here 6 units McCormick X6 VT-Drive Tractors were available for journalists to drive in practical trials along with 6 different implements.