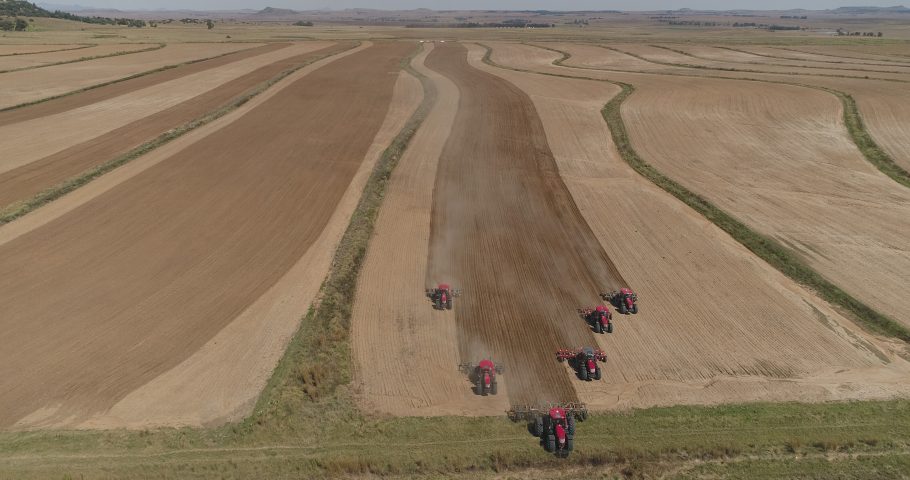 Shortly after the turn of the 20th century Hennie van Huyssteen’s great grandfather bought the farm Vlakplaas in 1907 near Lindley in the Bethlehem district in the Free State. Four generations later Hennie joined the family farming enterprise in 1997 and today practices mixed farming with maize and sunflower as summer crops, wheat if the season allows, as well as a livestock component.  The livestock comprises a commercial herd of Bonsmara type cattle as well as SA Vleismerino sheep.

Over the years Hennie moved away from traditional tilling methods and currently follows a reduced tillage programme, ripping deep on the row before planting.  He feels that it is necessary to do this to prevent soil compaction.

McCormick tractors have been part of this family for many years.  And talking to Hennie, this will not change in the foreseeable future. “I am hugely impressed with the service I receive from the dealer on a continuous basis but also from the Argo head office.  Their attitude towards me, as a farmer, has a tremendous impact,” according to Hennie.

The availability of parts during planting season is critical says Hennie. “I cannot afford to wait for parts during planting. Time lost during the optimal planting window will cost me money at the end of the season.”  Hennie says that the dealership as well as the company are going out of their way to accommodate him with parts and competitive prices.

To support this statement, Hennie talks about the time one of his tractors broke down during planting on a Thursday afternoon.  After a few calls it was clear the specific part was not available in South Africa at that time. Argo ordered the part from Italy and 3 workdays later, delivered the part on his farm. “They delivered on their promise and that gives me confidence in their support.”

According to Hennie the running cost of the McCormick tractors are not excessively high, and the fuel consumption is excellent.  Hennie is specifically impressed with the fuel consumption of the new models with the automatic transmission systems and feels that it is a great attribute considering the current fuel prices.  Another aspect that impresses him, is the easy handling of the tractors in the fields.

Hennie utilises a wide range of McCormick tractor models on the farm that include the Solis 90, BMax 105, MC105, Super 110, DMax 125, GMax 135, X7.650T3, X7.680T3 and the X8.680.  He says that there is a model available to address every need and the performance of the tractors makes farming a great deal easier. The tractors are also capable of handling all the implements used on his farm.

“I believe McCormick tractors are on par with other tractor brands in the same class regarding technology, ease of use, comfort and handling as well as safety.  In addition, the price is also quite competitive. I use McCormick tractors because I know the brand and because of the excellent after-sale service that I receive.  They have never left me in the dark. Although I know every farmer has his own preference regarding tractors and implements, I will most definitely recommend McCormick tractors to fellow farmers,” Hennie concludes.