Xtractor’s final days are chock-full of wonderful  satisfactions. The day starts yet again at dawn, quite a chilly, damp early morning at that, but the fog luckily dissolves by the time we reach our destination, the black suburb of Sebokeng, at the outskirts of Johannesburg. The Kuthlo-Tharo school  complex encompasses five institutes spanning all grades, for a total of over a thousand learners. Amref let us know that they needed a soccer field where kids could play and exercise, practicing life-saving healthy-living rules  that are of paramount importance in a country where unhealthy life styles are causing an epidemic of potentially lethal conditions such as heart disease and diabetes. The school’s sports field, long abandoned , was a tangle of overgrown weeds, scrub and litter that needed a crafty makeover – mission brilliantly accomplished! Today we are handing over the site complete with goal posts, side banners and field marker (not to mention a basketball court that had been utterly buried by the vegetation, and forgotten). A crowd of kids representing the five schools are waiting for us, neatly lined up on the field, and barely repressing the excitement at the morning’s unusual activities. The first part, the official bit with the speeches and formal introductions, is not a heap of fun. But once that’s over and done with, and Guinean freestyle soccer star Iya Traoré starts performing his magic tricks, they are all mesmerized. Talking about soccer, BKT (the Indian makers of our tractors’ excellent tires) as well as flying in Iya from France for the day also donated a whole lot of soccer balls to the schools, so that the learners can play and exercise. When the kids are eventually allowed to break ranks, they descend on us clamoring for selfies with the Italian guests, who also have to autograph t-shirts, uniform shirts, hands and arms of an army of enthusiastic fans! What a joy. 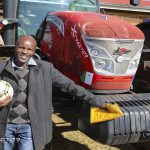 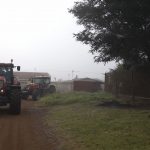 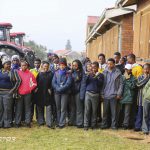