Private game reserves are very common in South Africa, and they are often located so close to national parks as to be almost indistinguishable, even though separated by fencing. Being smaller, they generally offer an easier game viewing experience, considering that touring the whole of the Kruger, for instance, might take weeks. We have been invited to visit one such private reserves, Thornybush, one of the best, and we enthusiastically accept. When we get there, the sun is shining with real African strength (quite unlike the autumn temperatures we are used to). It’s so fiercely hot we must sympathize with the elephants splashing around in a pond. We stop to watch them playing in the water, spraying it around with their proboscis, diving, swimming, pushing each other like children. When a big male spots us and wades out of the water, visibly irritated and ready to charge, we beat a hasty retreat, watched by an interested-looking little kudu, standing by. Some team members swear they saw a lioness prowling in the bush, although that’s not 100% certain. Wildebeest, zebras, giraffes and plenty of warthogs, on the other hand, are guaranteed. At the end of the safari, to thank for the hospitality, we lend our tractors to clear a tree toppled by elephants, and grade the damaged surface of a dirt track. Our opinion of the Kruger and environs? Number one. 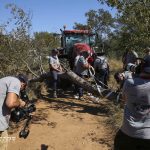 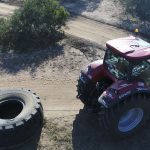 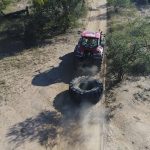 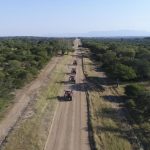 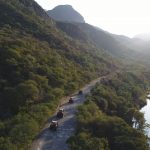 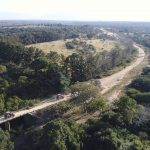 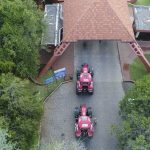