UK debut at the LAMMA show in January for new McCormick X7.624 VT-Drive

The new more powerful McCormick X7.6 VT-Drive tractor series has four models with up to 240hp and CVT stepless transmissions.

A new range of more powerful McCormick X7.6 VT-Drive stepless transmission tractors to Stage V emissions will be represented by the top model in a new-look line-up making its UK debut on the Argo Tractors stand at the LAMMA show in January.

The McCormick X7.624 VT-Drive with up to 230hp for draft work and 240hp for pto-driven implements and road transport is the most powerful model in the latest X7 Series, which also features lower running costs thanks to engine service intervals extended to 1200 hours, a more comprehensive 360deg LED lighting package set into a new cab roof panel, and new control features in the Premiere cab. 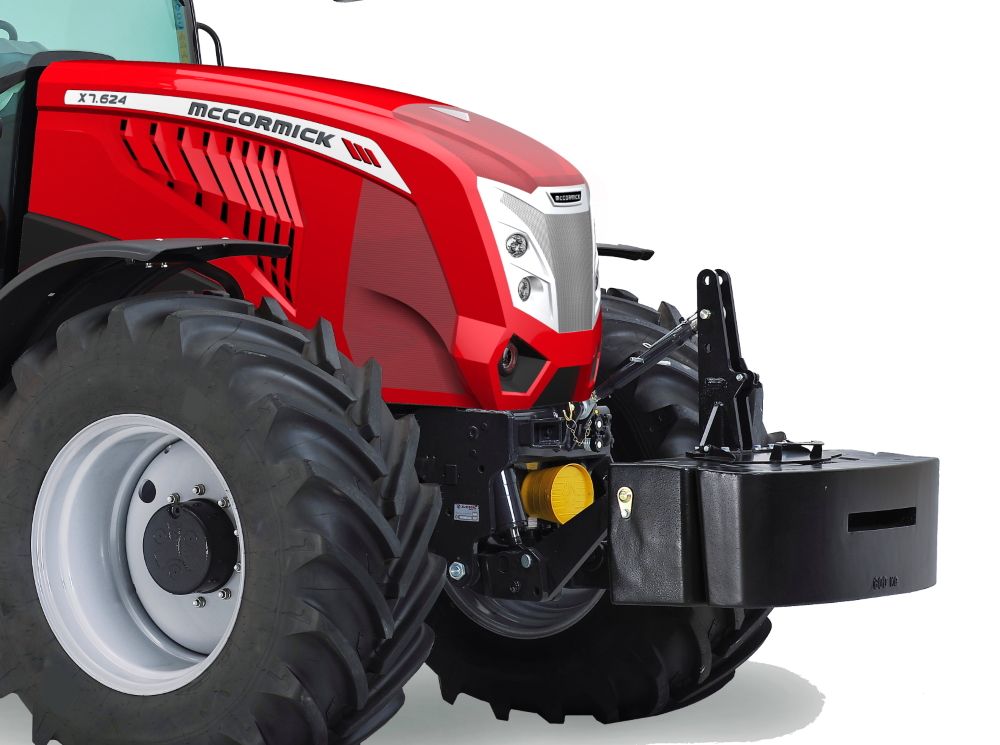 To emphasise their new levels of performance potential, the X7.6 VT-Drive tractors have a more purposeful chiselled-jaw appearance in the same style as the larger 264-310hp X8 VT-Drive flagship models.

Adrian Winnett, managing director of Argo Tractors operations in the UK and Ireland, said: “The push for more performance is relentless so Argo Tractors has taken the opportunity when switching to Stage V emissions-compliant engines to introduce more powerful VT-Drive models to the McCormick range.

“Our previous CVT models in the X7 Series peaked a 195hp; with the X7.624 VT-Drive they go to 240hp, giving farmers and contractors a very powerful but versatile package with all the performance and driver-comfort attributes of a stepless transmission.”

The complete line-up of new McCormick X7.6 VT-Drive tractors comprises the X7.620 VT-Drive with 180hp draft power and 190hp for transport and pto-driven implements such as power harrows and tillers.

McCormick Betapower 6.7-litre engines by FPT are supported stress-free in a cast iron front chassis that also provides front-end weight for optimum traction, and Stage V emissions compliance is achieved through a revised SCR AdBlue injection system working in combination with a diesel oxidation catalyst (DOC) – no DPF is required.

The latest-spec engines also feature optimised fuel filters and a more comprehensive oil filtration system, which together with a new engine oil specification has allowed service intervals to be doubled from 600 hours to 1200 hours, making a significant contribution to reduced running costs.

Running cost savings can also be made by using the engine braking system, which manipulates an electronic motorised valve on the turbocharger and is operated by a button on the cab floor.

Dynamic engine braking can be used to ease reliance on the service brakes and so extend the working life of the friction materials or to supplement the multiple oil-immersed discs in heavy braking situations. 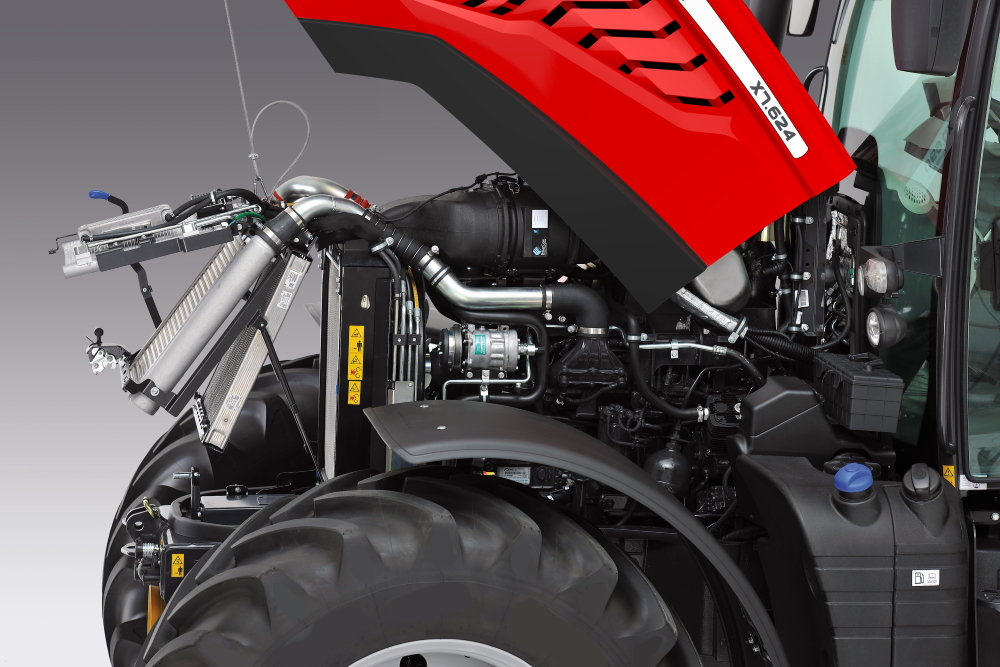 The 6.7-litre Euro Stage V emissions-compliant engines are carried stress-free in a cast iron chassis, are equipped with a Viscotronic variable speed cooling fan, and the cooling package opens up easy to clear dust and debris.

Control software developed by Argo Tractors makes the system easy to use by inexperienced and experienced CVT tractor drivers alike, with a choice of management modes providing optimum engine and transmission control strategies for different fieldwork and transport situations.

Four working speed bands can be set by the operator through the 12in Data Screen Manager display in the cab, and manual control is available through the accelerator pedal and Easy Pilot proportional controller.

The neat, simple and uncluttered design of the Premiere cab interior continues with these latest models but with control enhancements to further improve ease of use – including electric steering wheel tilt adjustment.

On the seat-mounted control console of these Premium specification tractors, the unique ‘MySwitch’ concept of a single button on the Easy Pilot hand controller that can operate five different tasks has been extended with a further four to which operators can allocate various hydraulic and other functions as they see fit.

For easy use, the supplementary MySwitch buttons are positioned around the roller thumb switch used to rapidly lift and lower the 9300kg rear implement hitch. 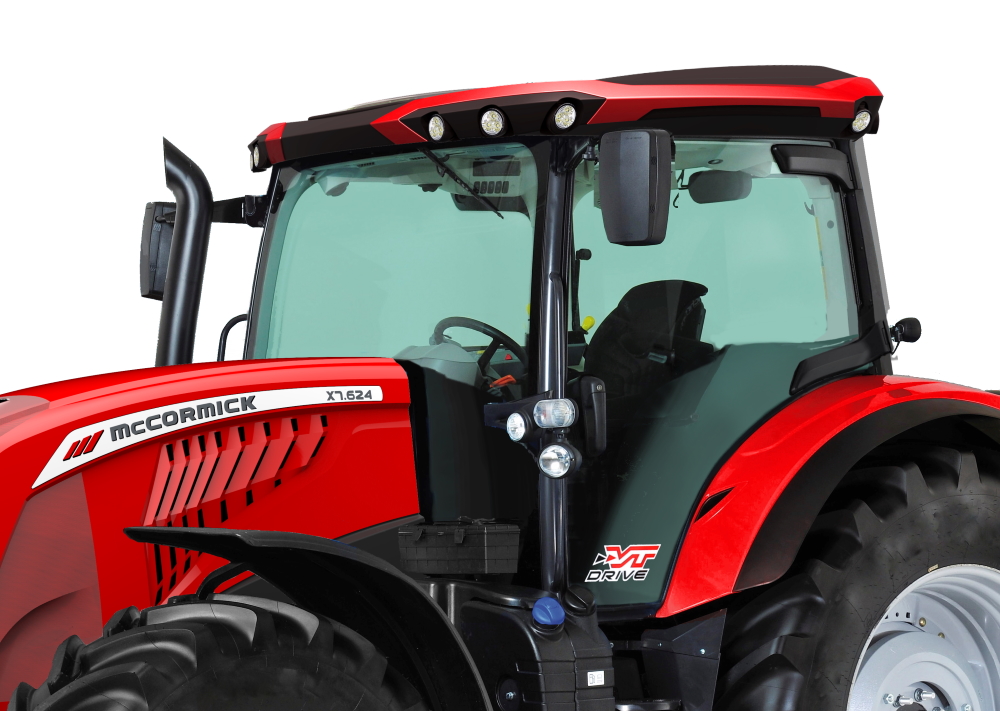 A new roof assembly for the Premiere cab houses a larger number of LED work lights arranged to better illuminate the area around the tractor.

Similarly, each of the electric double-acting spool valves – three are standard, up to seven optional – can be allocated to the armrest console paddle switches or to the mini joystick, which is typically used for operating a loader or the 3500kg front hitch.

The headland management system is designed to minimise the operator’s workload during headland turns; and so is McCormick Easy Steer, which reduces by up to half the number of steering wheel turns needed to go from lock to lock.

The Premiere cab’s mechanical coil spring and damper suspension can be upgraded to a semi-active hydraulic system with damper settings adjustable through the Data Screen Manager display.

Both systems complement the smoothing-riding and field traction-enhancing characteristics of the front axle with its parallel link hydraulic independent wheel suspension.