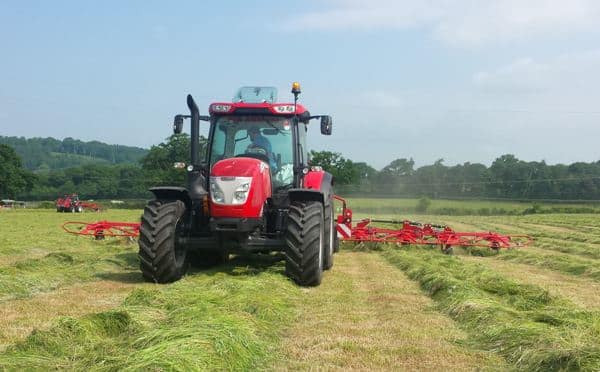 Outwardly, the only clue to the new continuously variable transmission that features in a new range of mid-size McCormick X6 tractors exhibited at the LAMMA 2017 show are the ‘VT Drive’ decals on the doors.

But within the transmission housing is a unique configuration of components that provides a driver with a choice of operating modes plus fine speed control and adjustment to suit every application.

“Regardless of how the transmission works, the important thing is the way it provides efficient power delivery, seamless speed control and equivalent or differential speeds between forward and reverse,” emphasises Ray Spinks, general manager and sales director at McCormick distributor AgriArgo UK.

“We’re confident it will make an excellent loader tractor with seamless shuttling and easy speed control, as well as a first-rate field tractor, especially for jobs and applications that benefit from the fine speed control of a CVT transmission.”

Three models are planned for the McCormick X6 VT Drive tractor range with maximum power outputs for draft work of 114hp, 121hp and 130hp, and boost power up to 140hp for pto and transport applications.

The ‘road’ setting comes with a top speed of either 40kph or 50kph, while the ‘field’ setting, which engages a reduction gear, has a maximum speed of around 30kph.

In both cases, drive is purely hydrostatic at first before clutch packs seamlessly engage to introduce a proportion of mechanical drive that increases as the tractor goes faster. A ‘hill hold’ feature prevents the tractor moving on a slope with the engine idling.

As part of an advanced specification, the McCormick X6 VT Drive tractors will have a choice of mechanical or electronic spool valves – or a combination of the two – along with front axle and cab suspension, load-sensing hydraulics and a seat-mounted control console with McCormick Data Screen Manager colour touch display.