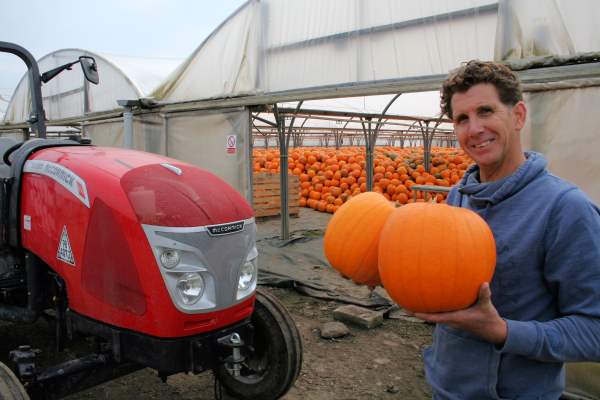 Growing pumpkins for Halloween is a labour-intensive operation demanding attention to detail at every stage, says Jonny Kok, but especially when harvesting, storing and shipping the colourful crop.

Producing perfect pumpkins for Halloween is quite a challenge for specialist grower.

Celebrations of Halloween on October 31 may be a time for kids to dress in witches’ outfits and indulge in trick or treating visits to neighbours.

But for Jonny and Sylviana Kok the weeks leading up to the ghoulish event are the busiest of the year.

As pumpkin growers, the fruits of their labour at The Vineries nursery in Outwell near Wisbech, Cambridgeshire are much in demand at the supermarkets and other shops they supply for carving into Halloween lanterns.

“From April to October, we’re pretty much working every day and as deliveries to the supermarkets ramp up mid-October we’re on it 12 hours a day,” says Jonny. “People imagine there’s not much to growing a pumpkin; but getting plump carving pumpkins into shops with a good colour and decent shelf life involves a lot of work and attention to detail.”

Pumpkins have been grown at the nursery alongside bedding plants and courgettes for the past 20 years but it’s only in the past eight or so that increased commercialisation of Halloween has pushed pumpkin production to new heights.

The Kok family now supply as many as 360,000 of the bright orange vegetables purely for Halloween celebrations and with such a short, critical season, it’s important to get things right!

The crop presents a number of challenges from the outset but particularly during harvest, storage and shipping. So much so that they start out with twice as many plants as the number of pumpkins they want to supply because of the likely losses at these different stages.

“Ideally, our customers want a large, well-shaped pumpkin that’s bright orange all over – something that’s pretty much impossible to achieve in volume but we try very hard to do it,” says Jonny Kok.

The process begins in Spring with seeds sown into trays, pricked out after they have grown into seedlings and then transplanted into a well-cultivated seedbed. It’s a labour-intensive process and at 5 acres/day, quite slow at the transplanting stage.

But it avoids the pitfalls of precision sowing, which costs less and is quicker at 20 acres/day but is susceptible to drought and crows gorging themselves along the newly-sown rows.

“There are advantages and disadvantages with both techniques so we hedge our bets by using both for half the crop each,” says Mr Kok.

There’s no spraying involved because fungal disease is not a problem and fly infestation tends to be confined to individual plants that can be pulled out by hand and destroyed.

But weed control by hoeing is critical to eliminate competition and allow the plants to flourish and produce sizeable fruit.

While hoiking out weeds within the row remains a manual task until robotic systems are accurate enough to get right up to the plant, hoeing between the rows is carried out by a tractor-mounted implement.

The operation was handled this year by a new 74hp McCormick X4.35M, which is a recent addition to the range.

In two-wheel drive form it has proved ideally manoeuvrable for getting in and out of the crop rows, as well as light enough to avoid soil compaction.

“We needed something a bit bigger than our two McCormick compact tractors for hoeing and handling three-quarter tonne bins with forks at harvest, but one that would still fit into our polytunnels,” says Jonny Kok. “We use McCormick dealer Andrew Downing at Wisbech for parts and servicing the compact tractors, so it made sense to get the new one from him.”

This is just the sort of application that McCormick distributor AgriArgo UK envisaged when the X4.35M was selected for the UK from a new range of utility models introduced by manufacturer Argo Tractors.

Its simple specification and lack of fancy kit around the driver’s platform should also make it a contender for yard scraping duties on dairy farms or for any other application in horticulture or on smallholdings where a mechanical clutch, 40kph 12×12 shuttle gearbox and 540rpm pto are sufficient.

A 30kph 16×16 creep option and two-speed economy 540rpm pto are also available for operators who want the extra ratios and slower ground speeds, as well as four-wheel drive if traction is likely to be an issue.

In addition to six weeks of continuous hoeing, the other main job for the new McCormick at The Vineries begins in August with the onset of harvest.

This involves positioning wooden pallet boxes where they can easily be filled by the hand-cutting team, and then transferring the bins back at the yard into the polytunnels where the pumpkins are carefully stacked for up to 10 weeks’ storage.

Each is wiped clean at every stage and handled as gently as possible to avoid bruising that can result in rot setting in; operators have to be diligent in rejecting any that look as though they will not last in good condition.

“We also make rigorous quality control checks when the pumpkins come out of storage and into the supermarkets’ display boxes, even when we’re under pressure to keep up deliveries,” adds Jonny Kok. “Everything gets a bit manic mid-October when we have up to 17 lorry loads a day to get away!”

He urges people who buy his wares to also handle them with care because, like any fruit or vegetable, they will soon start to spoil if bashed or thrown into the back of a car.

“Save the artistic face carving until just a few days before the Halloween celebrations to keep the pumpkin in good shape,” he advises. “And remember that carving varieties are not the best for soup or a pie!”

As for the team at The Vineries, the aftermath of Halloween is the time when all the tractors and other equipment get a thorough wash down and service, and the operation closes down until early spring when the process starts all over again. 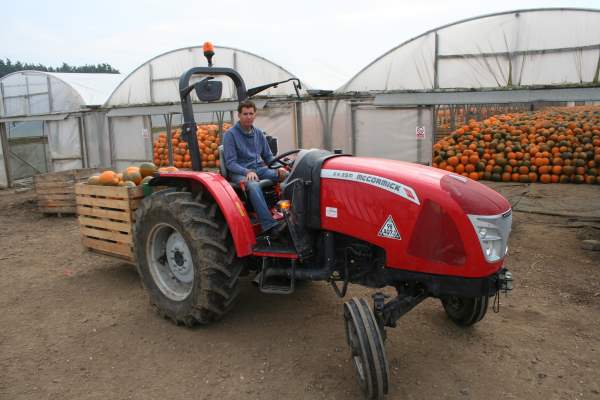 Growing pumpkins for Halloween is a labour-intensive operation demanding attention to detail at every stage, says Jonny Kok, but especially when harvesting, storing and shipping the colourful crop.