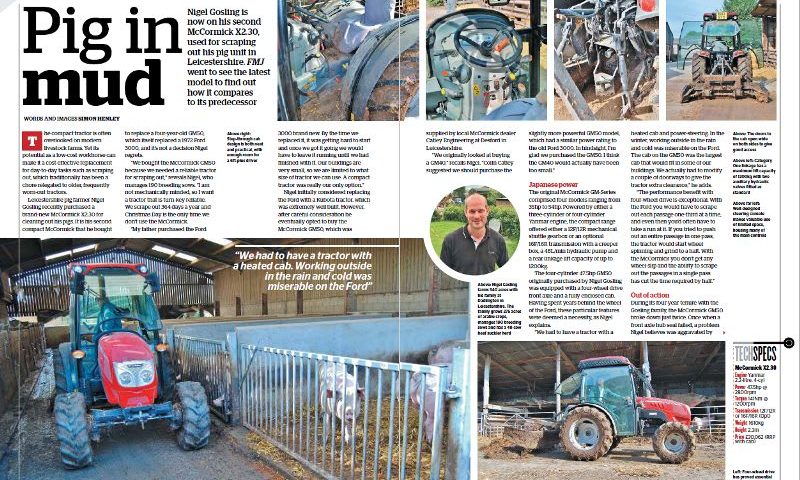 Scraping out pig yards 364 days a year means Nigel Gosling wants a tractor that is “turn-key reliable” when he goes to start it every morning. And that’s just what he gets from the McCormick X2.30 he purchased from dealer Catley Engineering in Leicestershire, according to a report in Farm Machinery Journal.

It’s his second McCormick compact in succession, so he was clearly pleased with the GM50 that the new model replaced.

“We bought the McCormick GM50 because we needed a reliable tractor for scraping out,” says Nigel, who previously drove an old Ford 3000 2wd for years.

After that experience, he put comfort as a key requirement for its replacement: “We had to have a tractor with a heated cab and power-steering. In the winter, working outside in the rain and cold was miserable on the Ford.

“The cab on the GM50 was the largest cab that would fit in some of our buildings. We actually had to modify a couple of doorways to give the tractor extra clearance,” he adds.

“The performance benefit with four-wheel drive is exceptional. With the Ford you would have to scrape out each passage one-third at a time, and even then you’d often have to take a run at it. If you tried to push out an entire passage in one pass, the tractor would start wheel spinning and grind to a halt. With the McCormick you don’t get any wheel-slip and the ability to scrape out the passages in a single pass has cut the time required by half.”

In terms of usability, Nigel Gosling’s McCormick X2.30 actually rates slightly higher than the GM50 model it replaced, but only for one specific reason.

“The new tractor has a radio,” he declares. “Otherwise, there’s not much between them. I like that the cab has wide-opening doors. I am 6ft 2in tall, and I can jump in and out with no problem. You can also open the front window, which is great in summer.”

He sums it up: “Buying a compact McCormick proved to be the right decision for us. It’s perfectly suited to what we want, and having a reliable tractor you know will start every morning gives you peace of mind.”

The report is published in the September 2017 edition of Farm Machinery Journal.