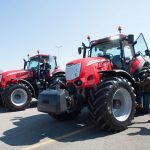 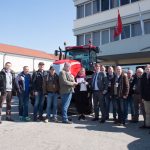 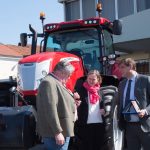 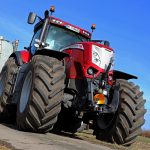 Not only did Argo Tractors win the “Tractor of the Year” award in the Utility category with its McCormick X6.4 VT Drive at Agritechnica in Hanover last November, but it also attracted the attention of Michael Piening, proprietor of Landwirtschaftliches Lohnunternehmen Michael Piening located in Adelheidsdorf, Lower Saxony in Germany, a farm contractor with over 30 years of experience in the agricultural sector, but also in the field of biogas installations, municipal ground care and constructions throughout the entire region. To achieve all this, Michael Piening and his company has relied upon tractors and currently runs a fleet of over forty machines of German manufacturers. Piening was pleasantly impressed by the design features of the top-of-the-range McCormick X8, on show at the Hanover venue. To prove that the characteristics of the machine were as good as what he saw, demonstrations took place from which Piening was definitively convinced by the qualities of the tractor: first and foremost comfort, technology and performance all based on the various applications that he would normally undertake in his role as contractor.

Piening was so convinced by the performance of the X8, he took a decision to place an order for five McCormick X8.680 VT Drive tractors from local McCormick dealer Frank Glockzin Kommunal- und Motorgeräte Vertriebs GmbH. These machines, along with six X7.670 VT Drive tractors which he has ordered, will add to the fleet owned by the German enterprise. Representatives of the company, accompanied by Michael Piening, were welcomed a few weeks ago to Fabbrico and the Argo Tractors headquarters, where the first two X8 tractors were officially handed over.

The delegation from Landwirtschaftliches Lohnunternehmen Michael Piening was received by Simeone Morra, Corporate Business Director of Argo Tractors, and was taken on a tour of all the Argo Tractors production facilities, situated in Fabbrico and San Martino in Rio. The visitors were also given a chance to test drive the two X8 McCormick tractors on the company test track before they were effectively handed over along with a commemorative plaque.

The McCormick X8 stands for maximum power, achieved by 310 HP model X8.680, without forgoing customer comfort and attractive looks. To face tomorrow's challenges, the X8 tractor family focuses on automotive styling features, ergonomics and ease of use. Right now, Argo Tractors is giving a practical demonstration of the qualities and performance of its McCormick X8 and X7 machines as they take part in the Xtractor Around the World expedition, a journey of over 6,000 kilometers through the great national parks of South Africa, vast expanses of vineyards, desert areas and along the ocean coasts.

The commemorative plaque and the keys of the first two X8 tractors were consigned by Simeone Morra, who commented: “We are really enthusiastic about having concluded this important operation, which is a further example of how Argo Tractors products are emerging in the market thanks to their technical specifications but also for the accessory services available, such as the targeted funding and ‘full maintenance’ proposals we are able to provide. We would like to thank Mr. Piening for his confidence in us and hope that this may be the beginning of a long and fruitful relationship".