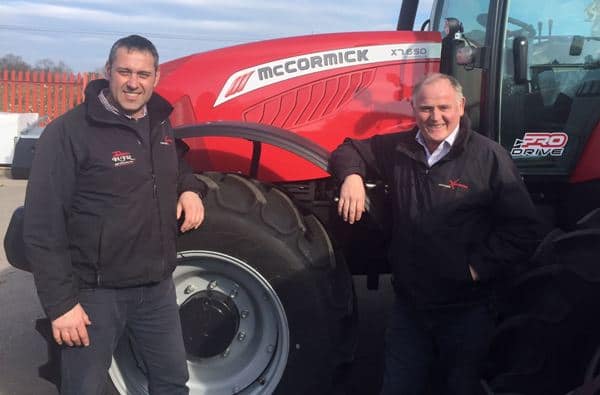 HJR’s northern salesman, Rob Owen (left), who has been introducing himself, the dealership and the McCormick range to farmers in the new area, with managing director Terry Hughes.

One of Britain’s leading McCormick dealerships – HJR Agri at Oswestry, Shropshire – has expanded into west Cheshire and north Staffordshire on the strength of its customer support and sales performance.

Phil Maw, area sales manager at McCormick distributor AgriArgo, said: “We’ve seen HJR Agri go from strength to strength as a McCormick dealer through their enthusiasm and focus on customer service, so we’re delighted to have reached an agreement that rewards the HJR team’s hard work with a bigger territory”.

“With years of experience between them, the directors and staff know that to succeed, it’s essential to focus on customers and their service expectations,” he adds. “HJR is always quick to respond and on the sales side maintains high stock levels of both new and used tractors to meet customer needs.”

Terry Hughes, managing director at HJR Agri, also welcomes the new agreement: “Expansion is always useful for any business so being able to extend our McCormick customer base is a great opportunity for us,” he says. “We already have the resources to serve our extended area well in terms of parts, servicing and repairs, and we all look forward to welcoming farmers as new customers in the area.”

HJR Agri (Oswestry) Ltd took on McCormick for west Shropshire and mid-Wales a year after it was formed in 2008 by colleagues Terry Hughes, who leads the sales activities, his brother Alan Hughes and Melfyn Jones, who run the service side of the business, and Andy Roberts, whose domain is the parts operation and sundries showroom.

In 2013, the company expanded into north Wales with McCormick, from just west of Chester to Conwy in a territory that borders the area covered by Anglesey-based PGF Agri. Now, the dealership’s McCormick territory extends further east to Crewe and Newcastle-under-Lyme, taking in west Cheshire, where it borders a territory looked after by Barlows Agri from a new base at Marton near Macclesfield, and north Staffordshire down to Market Drayton.

“This area is very accessible from our Oswestry base, where we have five experienced and McCormick-trained personnel to call on for workshop and on-farm repairs and routine servicing,” points out Terry Hughes. “As far as sales activities are concerned, I’ll be sharing the extended territory with our north Wales salesman Rob Owen, helping farmers and contractors find the most suitable McCormick tractor for their needs.”

Rob, who lives in Ruthin, joined the business 12 months ago and has been visiting farms in the new area to introduce himself, the dealership and the McCormick range.
“Becoming a machinery salesman has involved a very steep learning curve but having worked on farms and for a contractor I bring hands-on, practical experience that can be helpful to farmers unsure about the best tractor size and features for their needs,” he says.

As someone who has driven a number of different tractors in previous jobs, getting to know the McCormick range has been something of an eye-opener: “I can honestly say I’ve been really impressed with the McCormick products; they’re a long way from the impression some people have of them and are genuinely under-rated in my view.”

Over the past three years, a €75 million new product development programme has transformed the McCormick range from its ‘Doncaster’ origins into a broader and more modern line of tractors that stands comparison with any other make or brand.

Covering every power segment from the new-look 44-54hp X2 Series compact tractor to the newly-unveiled X8 VT-Drive giant with more than 300hp, the McCormick range features everything from low-cost cubicle scraper tractors to heavy tillage machines.

“The range is backed by dealers like HJR Agri dedicated to supplying the right tractor for the job and providing high-level customer service,” says Phil Maw of AgriArgo. “We urge farmers in HJR’s new area to arrange a demonstrator test drive – it’s only from the driving seat that they’ll discover just how good today’s McCormick tractors are.”

Terry Hughes: “Expansion is always useful for any business so being able to extend our McCormick customer base is a great opportunity for us.”

HJR’s northern salesman, Rob Owen (left), who has been introducing himself, the dealership and the McCormick range to farmers in the new area, with managing director Terry Hughes. 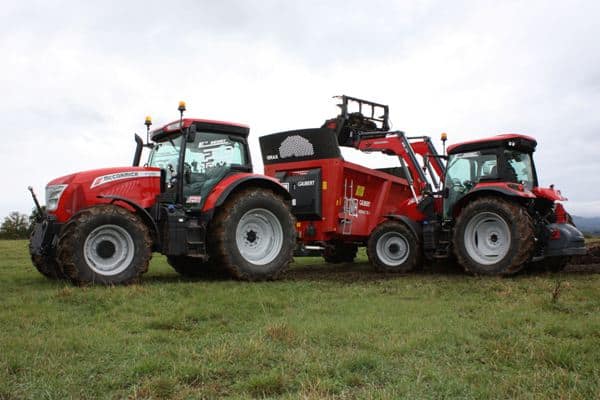