New recruit – Andrew Starbuck (right) has been appointed product manager for Argo Tractors operations in the UK and Ireland as Paul Wade retires from his product specialist role after a 44-year career in agricultural engineering.

An important two-way technical communications role between the Argo Tractors factory and independent dealers supplying McCormick products has been taken on by Andrew Starbuck, a new recruit to the growing team covering the UK and Ireland.

“As product manager, my principal role is to communicate technical information to our dealers about the features and benefits of the tractors so they are fully informed when talking to customers,” he explains.

“But I will also be referring any constructive comments and observations from users back to our team at Harworth and also to the product managers and engineers at the Argo Tractors factory.”

Adrian Winnett, managing director of Argo Tractors operations in the UK and Ireland, says that effective two-way communication is essential to help with Argo’s philosophy of continuous development as current products are refined and improved while new tractors are planned for the future.

He adds: “This is an important role in our expanding team, so I’m delighted to welcome Andrew, whose past experience working for dealers and for Europe’s leading potato and sugar beet equipment manufacturer will be invaluable.”

Andrew takes over from product specialist Paul Wade, who has retired after a long career in agricultural engineering, first with International Harvester in the UK, then with the merged IH and Case operation before the Doncaster factory became part of the Argo Tractors group as McCormick.

“It’s 44 years since I made the journey from Bourne in Lincolnshire to Doncaster to work temporarily for IH on a programme of overseas market training,” says Paul. “That temporary position later became a permanent one and ever since then I’ve worked in product sales and technical training, and liaison with product management at various tractor factories in Europe and North America.”

Adrian Winnett said: “For years, Paul has been the go-to man for anything technical, for when product features needed explaining and putting into an on-farm context. He’s made a tremendous contribution to the uptake of tractor technology in general, as well as to the Argo Tractors business and others he’s worked for over that time. We wish him a happy and relaxed retirement.” 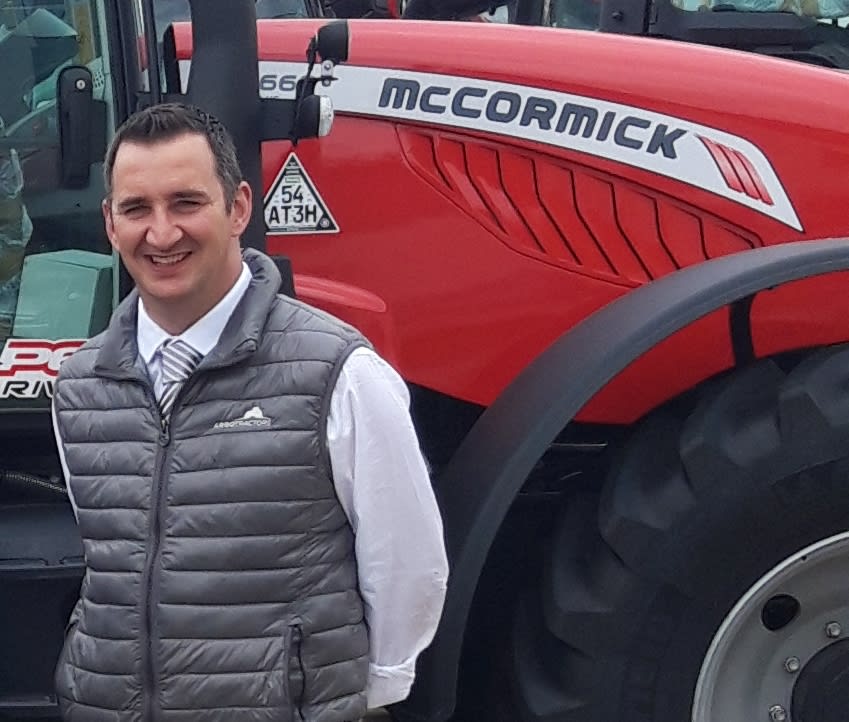 “My first visit to the Argo Tractors factories in northern Italy was a real eye-opener,” says Andrew Starbuck.

As the new product manager, Andrew Starbuck is realising an ambition to work with tractors once more after 10 years with Grimme in area and national sales roles within the UK, which followed three years in farm management and two years with a dealership in his home county of Nottinghamshire demonstrating tractors and harvest machinery.

“This new role combines elements of all the jobs I’ve had in the past – product technical detail, technical and sales training, and liaison between all parties in the process of supplying machinery to end users,” he points out.

“I was well aware of the McCormick range, of course, but not so knowledgeable about the Argo Tractors organisation behind the products – and it’s been a real eye-opener.

“My first visit to the factories in northern Italy emphasised that Argo is a manufacturer not just an assembler of tractors; machining and assembly of all transaxles, hydraulics and front axles for all models from 43hp to 140hp is carried out in-house and Argo also makes the cabs for all its tractors.

“And when you consider how the entire range has been transformed in the past six years with new and improved tractors that now go to 310hp, it’s quite astounding for a family-owned business.”

Time spent with his own family – he is married with a young son and daughter – is an important part of Andrew Starbuck’s life, so a shorter commute from his home in Mansfield to the Argo Tractors base in Harworth, South Yorkshire for the UK and Ireland markets was another attraction of the new job.

“My background is very much hands-on farming, mainly arable and beef, and of course I’ve always been interested in machinery and tractors in particular,” says Andrew. “To now have an involvement in the tractor industry at this level is brilliant, a fresh challenge; I’ll happily put a McCormick X7 Series in the field against any competitor – it’s that good!”