The fourth generation of McCormick’s crawler tractors for open field work makes its debut on the market under the long-established name of TX, which stands for efficiency, safety and reliability in extreme working conditions. The TX4 STD range comprises two models with power ratings of 98.6 to 106 hp, both powered by new Deutz AG 3.6L, 4-cylinder engines with four valves per cylinder, turbocharger and aftercooler. These new engines meet the Stage 3B / Tier4i emission regulations using a diesel oxidation catalyst (DOC) which does not require a regeneration process for exhaust gas treatment. The engine hood has been restyled to give the tractor a more aggressive look and feel.

The TX4 STD features an Argo Tractors mechanical transmission with four speeds and two ranges which can be equipped with an overdrive or a creeper to provide 16 forward and 8 reverse gears. The mechanical rear hitch offers a lift capacity of 2600 kg which can be increased to 3400 kg with the addition of two assistor rams. Designed to deliver constant grip and superior traction on sloping terrain, the TX4 STD is ideally suited for field work on steep gradients including with heavy implements.

The driving position has been completely redesigned with a new dashboard and the adoption of digital instruments, while all controls have been ergonomically optimized for maximum ease of operation. The driver’s seat has received a new air suspension system that maximizes the ride comfort. The fuel tank capacity has been increased to 95 litres. The TX4 STD offers a choice of either lubricated or semi-lubricatedtrack chains ranging from 400 to 450 mm link pitch. 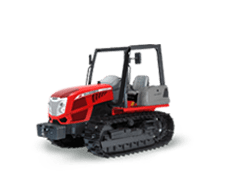